Just a quick one to announce that InjoyLightMedicine and I have teamed up for a giveaway!

Up for grabs are a copy of Derek Keeling's Long Road Home CD, a luggage tag and handle wrap set, a notebook perfect for your journaling needs, and a relationship reading from Lori-Anne! 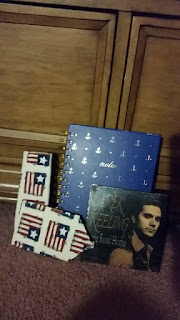 It may be my birthday but you guys are getting gifts!  We have teamed up with Team Keeling, The Indigo Papillon, and Camille Di Maio for some awesome prizes!

Up for grabs are: 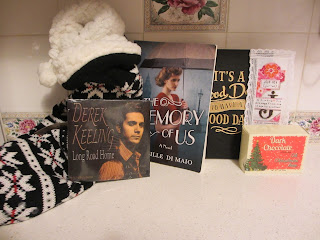 Just popping in real quick for an announcement! Chasing Windmills will be teaming up with Team Keeling, The Indigo Papillon, and Camille Di Maio for an awesome giveaway next week!


Watch this space for the fun giveaway coming 3/3!

Posted by Unknown at 8:48 AM No comments:

It seems as if 2016 has been a terrible year for celebrity deaths.  The expected, the sad, and the sudden.  They were all sad and they touched many people in different ways.  My younger brother visited the memorial outside David Bowie's New York home multiple times.

But, the ones that touched me the most were that of Carrie Fisher and her mother Debbie Reynolds a day later.  To lose our princess and rebel was sad enough.  But to lose her mother so soon afterward was heartbreaking.  The upcoming Bright Lights details their bond that was so strong not even death could break it.

When I was a freshman in high school one of our first writing assignments in English class was to write a fan letter.  Prior to this I had never written one or even considered it.  Being the Star Wars fan/classic movie fan that I was I went with Carrie Fisher.  I knew of her career beyond Star Wars and had read Postcards from the Edge.

By the time summer rolled around I had more or less forgotten about the letter.  Then, one day I received a rigid envelope in the mail:

There was no note but that didn't matter.  It was an actual signed photograph - no printed card.  We had kept track of which celebrities sent replies to our letters in class.  I knew very few had received anything.  So, to get this photo in the mail meant a lot to me.

Flash forward 15 years or so.  Wishful Drinking opens on Broadway at Studio 54.  I had a second row center ticket to one of the first shows after opening night.  Apparently, I had missed her mother by about a day.

Afterward I made my way to the stage door.  Meeting someone I had admired for so long was an exciting moment for me.  There was a decent sized crowd at the stage door but it dwindled the longer we waited.  People left in anger.  I'll never understand that.  Being a little disappointed is okay but to be angry seems a bit overboard.  Carrie didn't owe any of us more than a great show.  And we got that.

Finally, the reason for her tardiness was discovered.  She had a guest.  The doors opened and out came Dustin Hoffman.  Some people tried to get him to stop.  Others ignored him as if he weren't a two-time Oscar winner.  I did neither.  As he passed me I said, "Hi".  He stopped, looked at me, and said "Hi".  Then he was gone.  Not the most exciting Dustin Hoffman story but it's certainly better than having none at all.

Shortly after Dustin left the guard informed us Carrie would not be posing for pictures nor signing anything other than Wishful Drinking items.  Which was understandable.  The number of people looking to make a buck off her signature must be astronomical.

She finally emerged and started signing and kvetching.  Carrie being Carrie.  When she got to me we chatted a little about the show and I let her know I had enjoyed it.  Then, it went a little something like this:

"You were my first fan letter."

"Did you get anything back?"

"Oh, my mother handled it back then."

So, it was her mother who made sure I got my signed picture.  Another actress I had grown up admiring.  The knowledge added a little something extra special to the signed picture I had received in high school.  A picture I will always cherish.  More so now.
If someone you know is mourning one of these celebrities don't mock them. Don't roll your eyes. We're all fighting invisible battles. If something one of these people said/did/wrote helped them during a dark hour that is to be honored. Not maligned.
Posted by Unknown at 6:24 AM No comments:

Just giving everyone a heads up that from now until Friday, December 9 there's a $0.99 sale over at Seasoned Romances.  It's a great opportunity to get to know 24 authors whose books are simply waiting for you.

Take a peek at all these great buys! 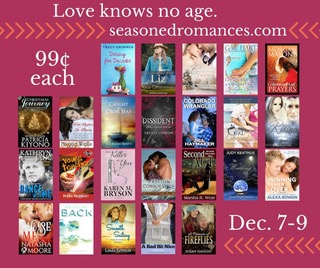 Posted by Unknown at 5:59 AM No comments:

GIVEAWAY CLOSED
I've been promising a Victoria Wyngate giveaway for some time now and it's finally here!

From now until Wednesday you can enter for multiple chances to win signed copies of Hidden Angels: Wildfire Lake Book One and Scattered Secrets: Wildfire Lake Book Two as well as Long Road Home by Derek Keeling!  Also featured are a canvas tote bag from Darling Designs and a bookmark handcrafted by me!

Enter below and good luck!

Over the weekend I was pondering the state of my blog.  Where is started, where it is now, and where it's going.

I started this blog over two years ago as a way to detail my journey through the query trenches.  The ups of requests and the downs of rejection.  But, along the way something changed.  My world changed.

Thanks to Pitch Wars, WFWA, and Book Splash my world suddenly became a lot larger.  I wasn't fighting in the trenches alone anymore.  Suddenly, I had a whole tribe that I didn't realized I'd been needing for a long time.

As that tribe grew my need to help them grew as well.  Giveaways and promos started working their way into my blogs and twitter.  It became a little less about me and what I was up to.  And that's fine.  If we don't grow and shift then we became stagnant.  Who wants stagnant people?

I don't know how the blog's going to grow going forward.  You'll find out as I do and I'm looking forward to discovering what's just over the next crest.  2016 has been a year of great change for me.  Over the summer I became co-guardian to my handicapped sister.  My role in her life hasn't changed but I can now legally make medical and legal decisions for her.  I've also been working on pushing out a lot of the old - both physical and less so.  I've also made decisions on how to deal with the negative in my life.  We'll see how that last one goes.

In the meantime I do have a giveaway coming up - I just don't have all the deets yet.  Hopefully in the next week or so.  I'm thinking about doing it the rafflecopter-ish way where every like/follow is an entry.  So, keep your eyes open for that.

Let's see where the world ricochets us today.

Posted by Unknown at 6:56 AM No comments: